Earlier this week Apple hosted its annual WWDC conference which brings together some of the exciting updates we can expect to see from the tech behemoth in the coming year, as well as an update on what the company is doing to tackle racial inequality in the sector.

WWDC 2020 was packed full of exciting updates, so let’s dive right in and check some of them out.

Apple CEO, Tim Cook rightfully opened WWDC with a retrospective analysis on the global effort to end racism and inequality for people of colour. While the announcements about their plan for a Racial Justice and Equality Initiative were released earlier this month, Tim set in stone the importance of the standing with minorities, pledging a commitment of USD $100m to challenge systemic racism in the sector.

Their plan includes a move to limit the inequality present in society for POC, through education, economic equality and criminal justice. He announced a new developer entrepreneur camp for black developers, which seeks to provide opportunities for upskilling and entrepreneurship for POC.

More information about their pledge can be found here.

There were lots of announcements around the forthcoming update to iOS. iOS 14 will include features such as ‘App Library’ which collates your current apps into category based containers for easier access. Widgets are also making an appearance in iOS14. A typically android style for data visualization. Widgets will allow users to see personalised information directly on their home screen, anything and everything from photo collages, maps, iMessage threads and weather will be present.

Picture in picture was another long-anticipated feature for iOS. The addition means you won’t need to completely close your FaceTime video calls, or other visual media in order to access your home screen and other applications.

Siri will become a whole lot less intrusive with the new update, materialising as an animated circle at the bottom of your screen, it will become a lot smarter in the coming months too, with increased functionality such as the ability to send voice messages.

Apple has once again removed weight from your back pocket, and not just in terms of cash. Car keys for selected models will become obsolete with the update, iOS 14 including NFC functionality to unlock your car.

Applets are another exciting leap in connecting users to the applications they need. It allows for a kind of ‘mini app’ to be utilised on your phone without needing to download the full thing. Simply scan your phone against a prompt card located at the event venue, and you’ll have access to core functionality from the app. 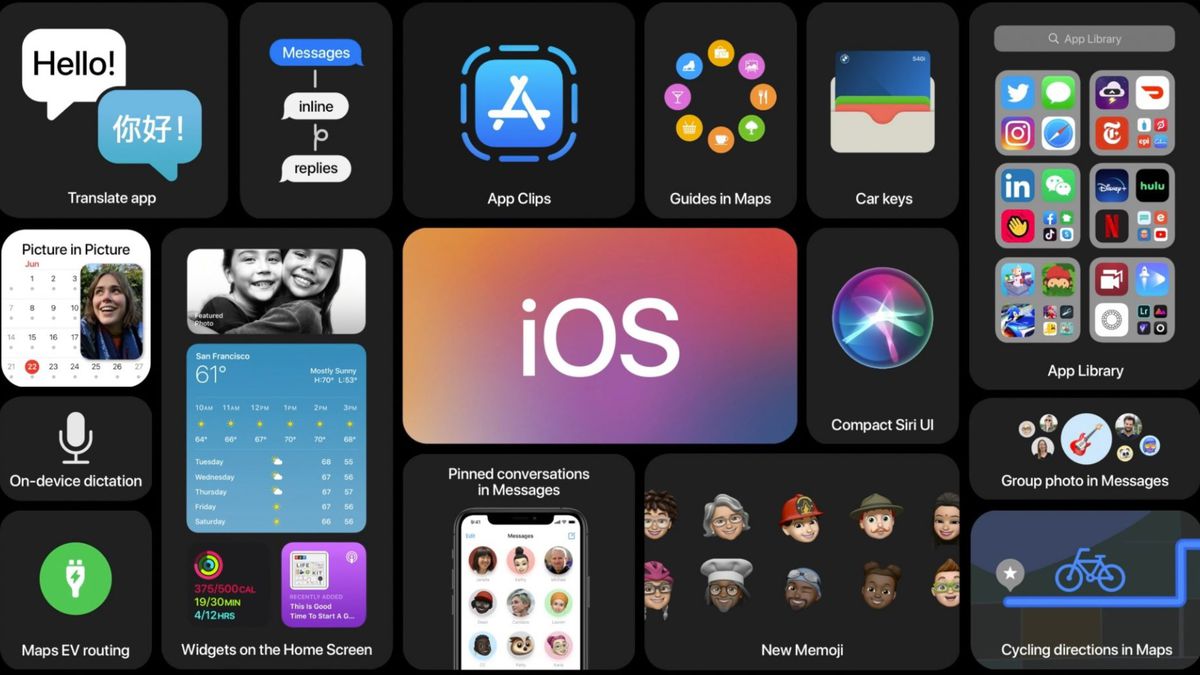 WatchOS 7 is coming to Apple Watch, with updates on a range of trackable activities including workout variations and now, even dancing.

The most pertinent updates for users presently is the introduction of automatic detection of handwashing. Triggered by the movement of rubbing your hands together as well as the sound of running water and squidging soap, Apple Watch will tell you exactly how long you need to wash your hands for. Sleep tracking was also introduced which utilises the motion of slow, deep breaths to measure sleep length and cycle stage.

Developers will be required to self-report access levels, identifying the range of data they’re tracing from you, and the extent to which they’re following you to different applications. This information will be put on product pages on the app store, so you know in advance the amount of data you’re giving over.