We worked with Coeliac UK to combine a previously multi-product offering into a singular, expansive application for their users both new and existing. 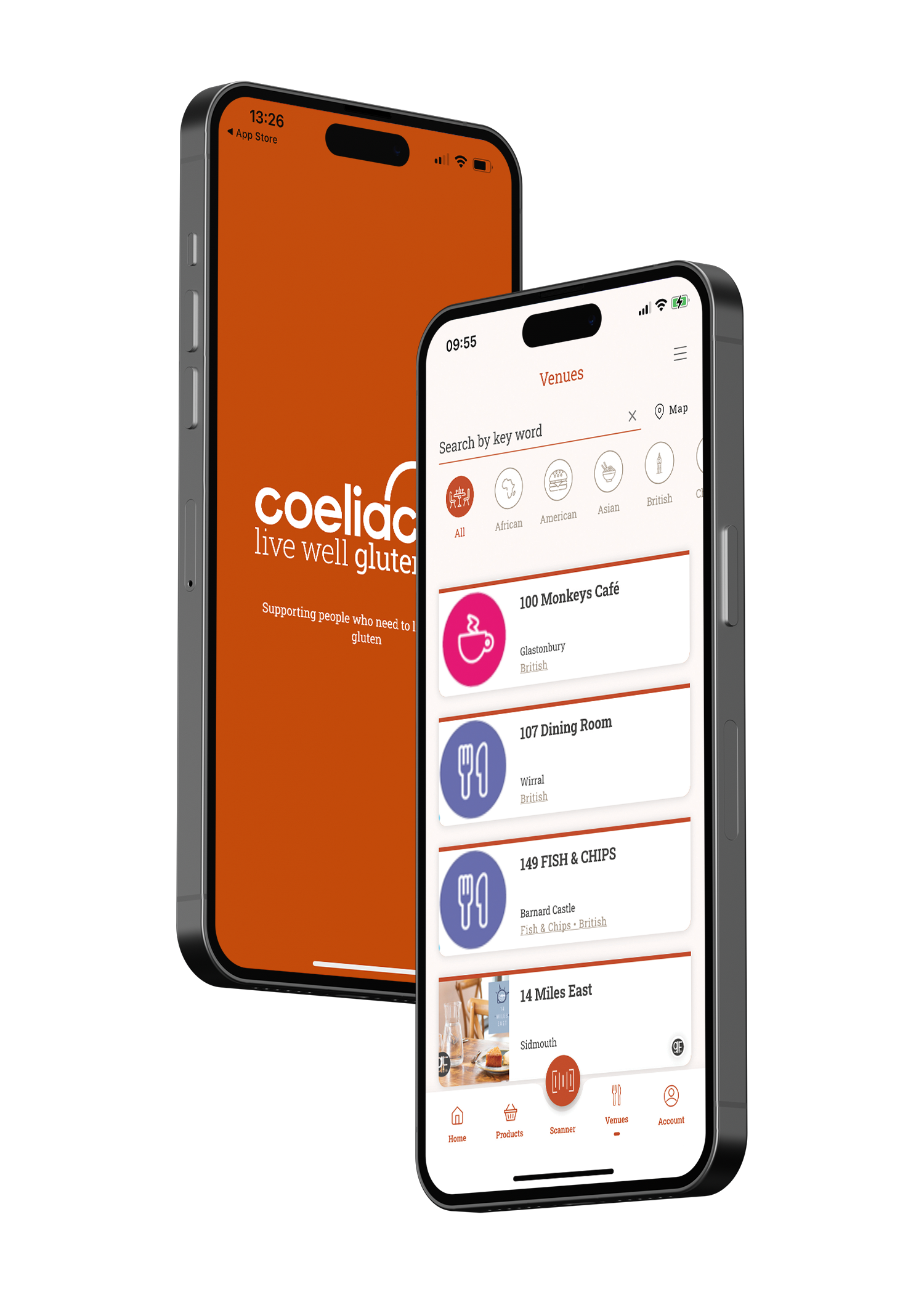 Coeliac UK has been assisting people with coeliac disease and other gluten-related illnesses lead happier, healthier lives for more than 50 years. They achieve this by working to improve the quality of gluten-free food available in more locations, offering their community unbiased, reliable guidance and assistance, and financing important research to not only manage the effects of gluten but also uncover the causes of coeliac disease. 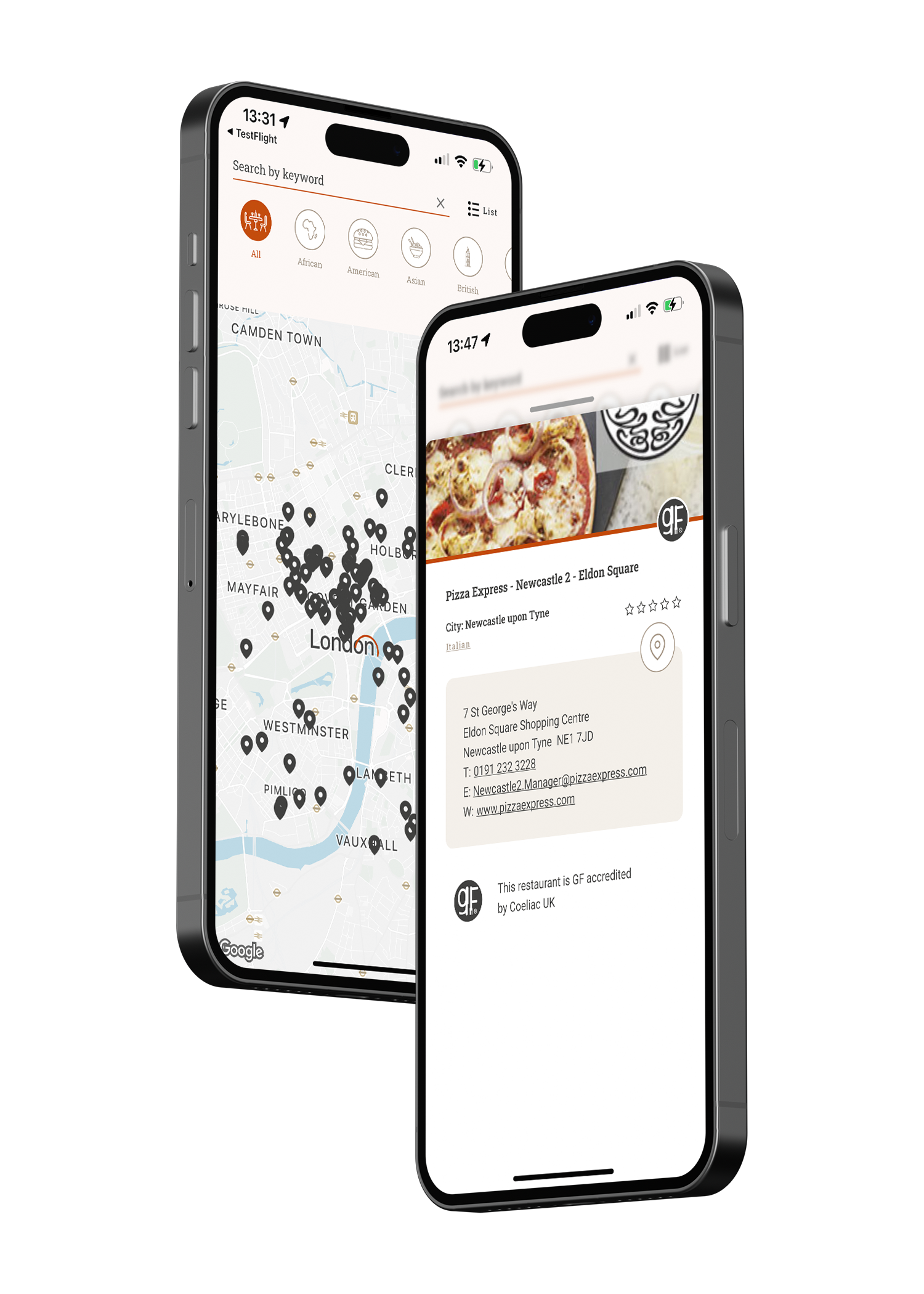 Coeliac UK came to Arch looking to create a unified app experience to replace their existing offering, which at the time consisted of two apps with distinct functionality. Additionally, the development of the new application had to take place under a strict development timeline in order to meet the timeframes set for the retirement of their app offering.

Owing to the existence of the applications prior to speaking with us, Coeliac UK had a strong sense of what they wanted to achieve through the introduction of the new app, and which functionality would be core to fulfilling their goals. 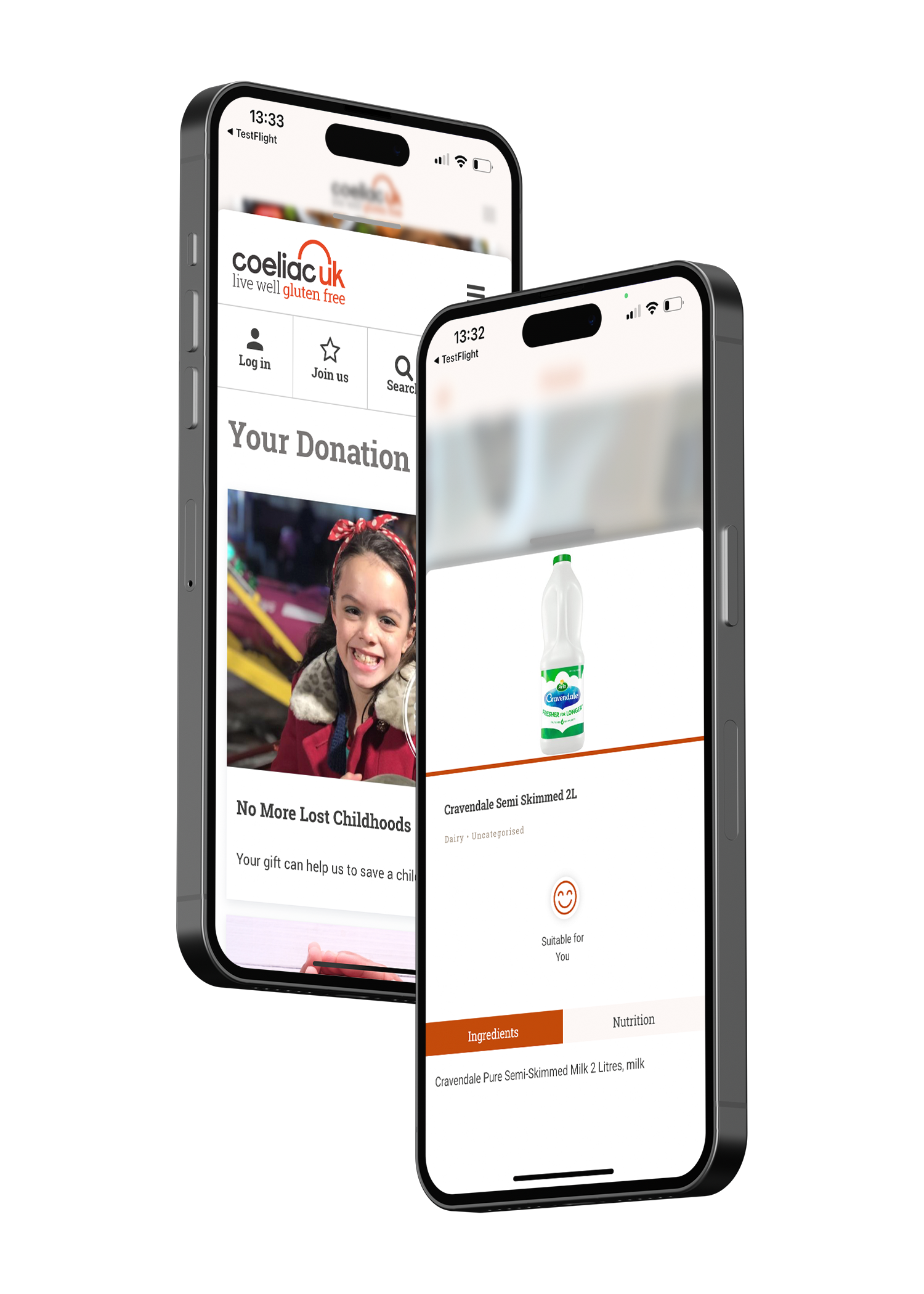 In order to achieve the tight deadline, whilst also delivering an initial product that would allow Coeliac UK to achieve their goals effectively, we began by working through our discovery process, with which we were able to determine the most effective order for the release of features most essential to their user base. This saw us also consulting with Coeliac UK on how best to improve features, as well as mapping out a number of new feature sets. From this point, we were able to determine an extended development programme that included multiple release phases, with the first launching on time for their requirements, and subsequent releases of less essential features into 2023. All of these phases were planned as part of the initial discovery processes so Coeliac UK had a comprehensive understanding of the timelines associated with a full scope development.

The app backend connects to a sophisticated network of API’s, facilitating functionality from the previously unified apps, into a singular product. Through connection to FoodMaestro, the app is able to call on, and deliver product information on hundreds of thousands of packaged foods, which is accessible via a barcode scanner built into the application. This functionality forms one core offering of the application in it’s current state, which previously required its own individual app.

In addition to this, the app utilises an API that applies geolocation data in the pursuit of surfacing relevant information on nearby restaurants that have a strong gluten free offering, allowing users to make intuitive decisions about where they would like to eat. Layered on top of this functionality is the ability to surface restaurants based on cuisine, food types, and distance from current, or expected location. In addition, a core offering of another app which Coeliac UK used to offer has now been brought under a singular digital product. Once the user has identified at a high level the restaurant they’d like to visit, quantitative and qualitative ratings are provided as part of a restaurant overview page, which highlights key contact information, a ‘best for’ section, gluten ratings, and descriptions of items offered.

The app also functions as a centralised place for Coeliac UK to engage with their audience, by hosting rich media, links to various services offered by Coeliac UK and the ability for users to create personalised accounts and sign up for premium features. 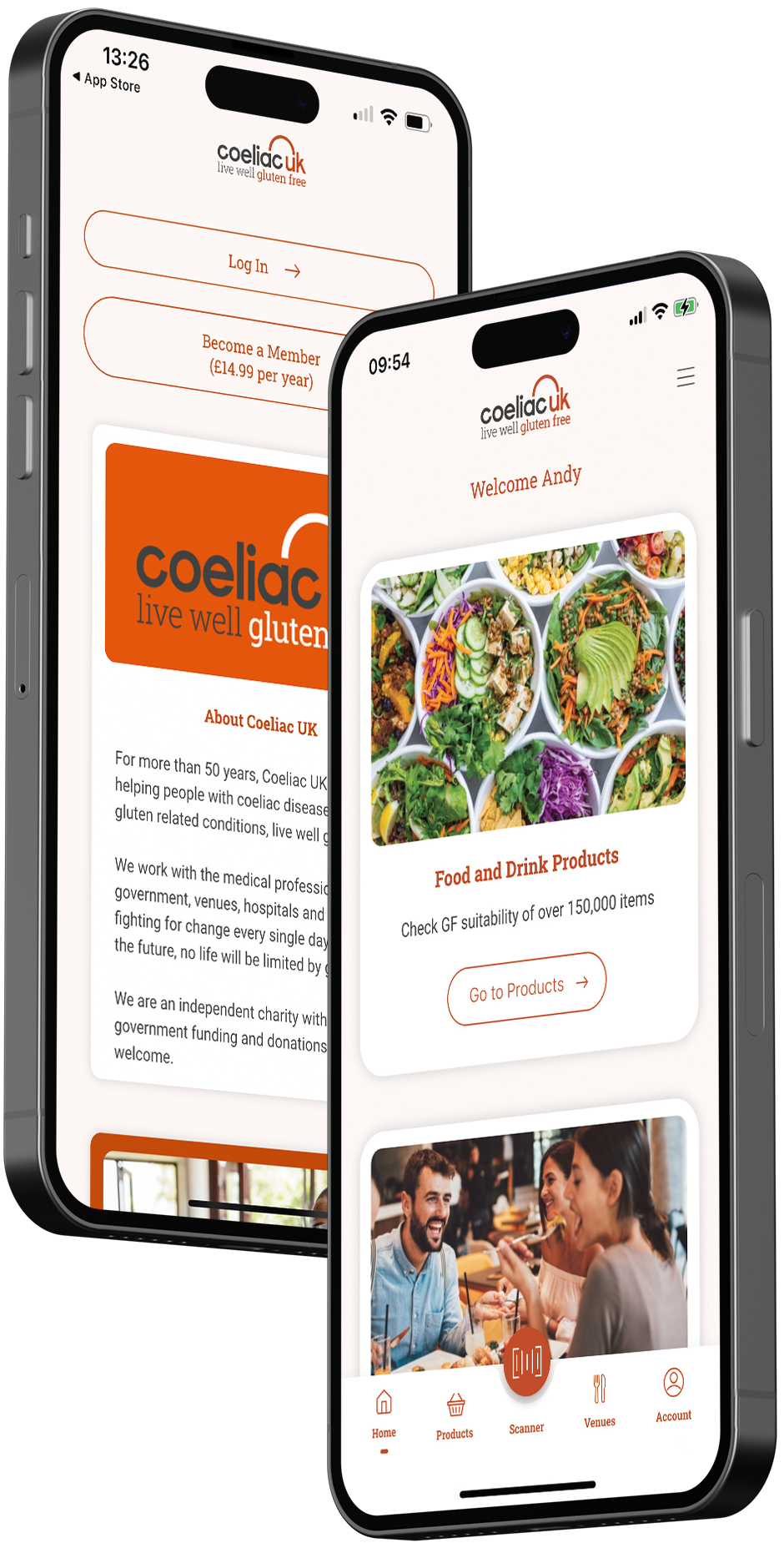 On the Back End: Coeliac UK

Coeliac UK: From the Designers

The main objective of the new app was to make using it easier for the user by giving them access to all the information they needed in one place. The previous apps had an external sign-up procedure; we wanted to integrate the sign-up into the app to make the subscription process smoother and incorporate this in the onboarding process within the app.

We used the Coeliac UK  brand identity to develop a simplified user experience with calls to action that were obvious throughout the app. This allowed content to be readily digested and the user to locate what they are looking for quickly.

To ensure that the design is accessible by default, we adhere to the WCAG 2.1 requirements. To do this, we examined the font sizes, colour contrast, layout, and navigation. To make sure that our solution addressed the highlighted issue, we adhered to all the accepted design best practices. We made an effort to balance the app and create a visual hierarchy that made sense to the user. Along with this, we talked about sitemaps and user flows to ensure that the UX follows the right logic and contributes to the app's overall usability. 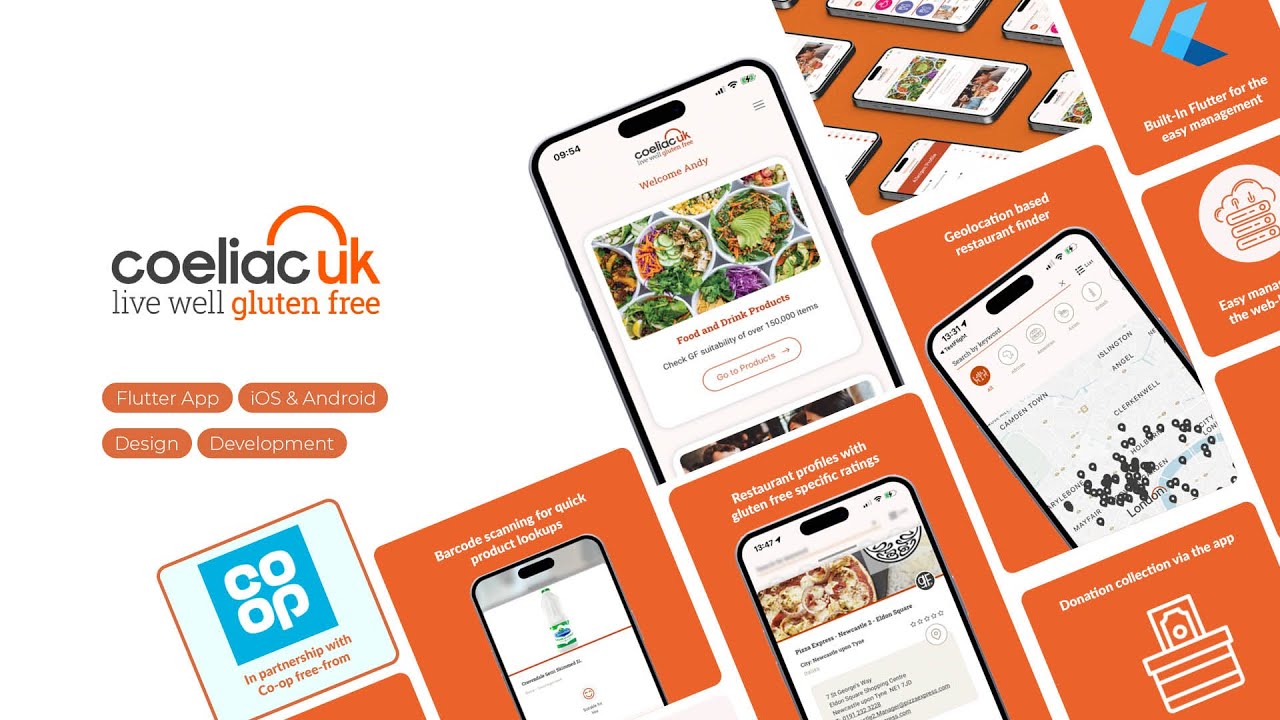 Click the image (left) to place our overview video.